The Informal Justice Court is based on inspirations and bestpractices from around the world. One of the inspirations is a very special informal court in Bamenda Central Prison in Cameroon: a court of and for prisoners. The idea behind the prisoners' court originated from prisoners who face legal uncertainty.

Prisoners adopted various strategies to overcome some of the problems the formal justice system failed to redress. One of such strategies was the ideas, experiences and contributions of prisoners put together to strengthen the prisoners court. Because a majority of prisoners at the Bamenda Central prison are uneducated, they often view the formal justice system as distant, inadequate, irrelevant or alien, leading to situations in which they elevated the prisoners court to the level of the formal courts of justice.

Inmates assumed the roles of judges, police officers, prosecutor, witnesses and the defense lawyer. They state as their primary duty to educate and sensitize every prisoner who goes through this court. Older and experienced prisoners train less experienced prisoners with skills and tactics needed during criminal proceedings.

This way the participants are introduced to an imagined courtroom where they are taught the necessary skills such as how to overcome the tensed courtroom atmosphere. The participating inmates know that the verdicts of the prisoners’ court often are in line with those of the formal courts, giving them a form of legal certainty. (From: Pangmashi E. N. Yenkong (2011), Prisoners in-justice Prisoners’ encounters with the criminal justice system in Cameroon). 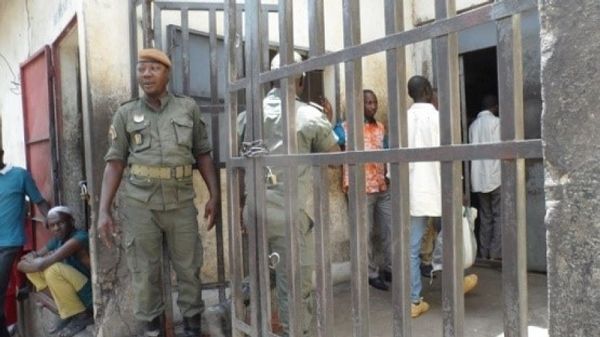 The entrance of Bamenda Central Prison, where the prisoners’ court takes place.

More Behind the Scenes